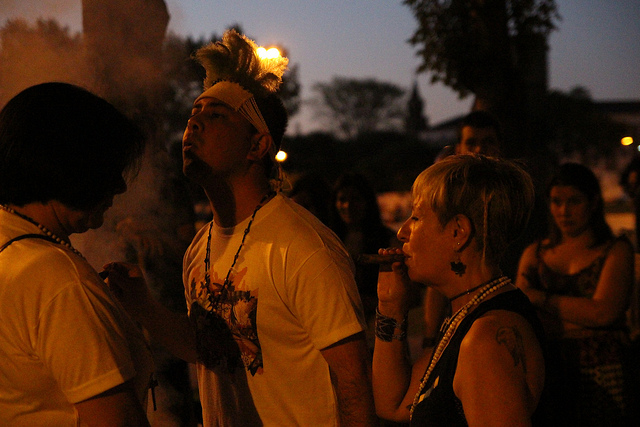 Guaraní is an indigenous language of South America with more than 8 million speakers worldwide. It is worth mentioning that among its speakers there are not only indigenous people, a fact that gives the language a unique peculiarity among the aboriginal languages. It is one of the official languages in Bolivia and Paraguay, a working language in the Southern Common Market (MERCOSUR) and an alternative official language in Corrientes (Argentinian province). For five centuries, it has been forbidden and censored by the region’s political, social, and economic elites. This initiated during the Spanish colonization and continued in the new countries that were established later, in the region. The situation resulted in a strong marginalization of the language and its speakers. As a consequence, the intergenerational transmission of the Guaraní language was confined to deprived people and rural sectors (as the case of northeastern Argentina), or if continued its transmition, does with a connotation of inferiority and subordination (Paraguayan case). In Argentina, Guaraní became a minority language in danger of extinction.

The countryside exploitation, the expropriation of the Guaraní territories, the deforestation of the jungle and the consequent migration of the Guaraní communities to the big cities, accelerated even more the language interruption. This process, that was facilitated and promoted by the State, made Guaraní a language for private use and limited it to the family environment. The formal and public field was reserved only for Spanish. This generated phenomena of interference between both languages (known as “yopará”), this sequence produces a system called “diglossia” (When two languages are spoken, but one of them is considered cultured and prestigious, turning the other uneducated and stigmatizing; one is systematized and schooled, and the other is not).

One of the Argentine cities that received a significant amount of Guaraní population, was Rosario. Among its inhabitants, there are first, second and third generation guaraní speakers from the northeast Argentine and the Republic of Paraguay. These people are mainly settled in the peripheral neighborhoods of the city, many of them in extreme poverty conditions. This socio-economic reality, along with the dynamics urbanization and the non-existent active policies to promote the use of the language, accelerated the loss of their mother tongue. For this reason, the revitalization of the Guaraní language and culture is in the hands of associations and institutions that obtain scarce funding and government support.